(30 Sep 2007) SHOTLIST
Okinawa, Japan September 2007
1. Pan of American men and Japanese women at club dancing
2. Close-up of GI dancing with Japanese girlfriend at club
3. Pan out of Japanese woman and American GI talking at club
4. Pan out from Skymaster Club on Atsugi Air Station to Atsugi Main Gate
5. Shot of Japanese woman with stroller and pregnant friend heading for Atsugi Gate
6. Pan out from main gate at Atsugi Air Station
7. Shot of Kyoko Kubota and daughter Jasmine Kubota in Yokohama city park
8. Close-up of Kyoko Kubota and daughter Jasmine in park (mute)
9. SOUNDBITE (Japanese) Kyoko Kubota, single Japanese mom
“People around me is very supportive but only few people actually help. When you do application procedure the result is totally different, depends on who you talk with. I thought that’s typical American style.”.
10. Cutaway of Hitomi Sakamoto with daughter Moon in Shinjuku.
11. SOUNDBITE (Japanese) Hitomi Sakamoto, Single Mother
“When I talk with other single mothers who are in the similar situation as me, we exchange information with each other. However, we cannot be just waiting on the support so we are all working hard on raising our children and trying to be independent.”.
12. Cutaway of lawyer Annette Eddie-Callagain entering her Okinawa office.
12. Cutaway of lawyer Annette Eddie-Callagain chatting with receptionist
13. SOUNDBITE (English) Annette Eddie-Callagain, Lawyer
“I first arrived here in Okinawa as a JAG, that’s what the Judge Advocate General call a military lawyer in the Air Force. I was assigned to Kadena Air Base here in Okinawa, Japan. And it was during that three-year period that I learned there was a problem here for the local national ladies who were having babies for, most of the American guys, who were leaving and leaving the women without any financial support for financial support for the children and that concerned me. When I left here in 1993 I decided that I look into some avenue in the United States to help these ladies.”.
14. Cutaway shot of Marines training on Okinawa.
15. Shot of Japanese woman with baby awaiting the return of her husband to Yokosuka Naval Station.
16. SOUNDBITE (English) Annette Eddie-Callagain, Lawyer
“And the first case was out of Illinois, Chicago, Illinois. And that father had outright said, ‘Nope, I am not paying child support. I’m in the United States and there is nothing you can do.’ And so that was the first case the we were able to get a child support order from and then the rest of them started to come after that. Up until this point, the government of Japan still has not done anything in terms of establishing a child support programme”.
17. Cutaway of Annette Eddie-Callagain talking to staff.
18. Shot of Annette Eddie-Callagain pulling out legal book from shelf
19. SOUNDBITE (English) Annette Eddie-Callagain, Lawyer
“And so that I felt that in order for me to try to give something back to the community, especially the children, because this is all about the children. It is not for the mothers. It is not against the fathers. It is for the children. So in order for me to be able to do that then I needed to bring a program to them didn’t take any money out of their pockets. Now, we charge a nominal fee for handling their case. Why? Because we are up to 300 plus cases”.
21. Shot of Annette Eddie-Callagain at FESCO ceremony.
22. SOUNDBITE (English) Annette Eddie-Callagain, Lawyer
23. Cutaway of Annette Eddie-Callagain poses with pictures with Japanese Royal couple Prince and Princess Hitachi Nomia and other FESCO awardees (no ambience audio).
LEAD IN :
STORYLINE:

You can license this story through AP Archive: . 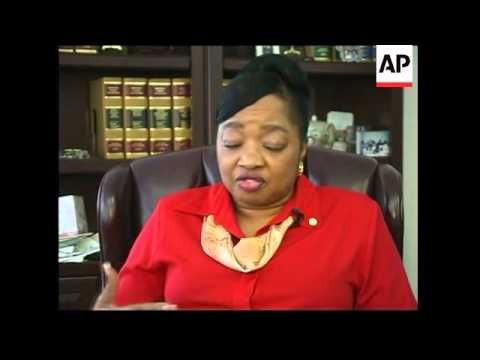 Why people went mad about tulips? : A...

Pathways to Financial Health and Resilience During COVID-19...

5 things to help with financial anxiety |...

How To Make A Budget | Budgeting For...

The lady at the end has me dying. She isnt playing that man will be paying or she will be on his ass. Lol.its sick to think they can f woman and if a child comes from it they dont care. Its was sick then and now.

Can’t believe this is still happening. Ladies living near military bases especially where foreign troops are stationed have to be careful. I hope the children and mothers get the help they need, it’s a very sad situation.

That lawyer is doing great work over there. God bless her.

Many Japanese girls are so pure and innocent. They should know better. Especially stay away from blacks.

This has been going on since the end of WWII. There are about 50,000 US military personnel stationed in Japan along with 40,000 dependents of military personnel and another 5,500 U.S. civilians employed by the Department of Defense. In Okinawa there are over 10 bases and many more air stations, training areas etc. This is bound to happen. Simple, both parents need to be financially responsible for any child they produce, just like in the USA.

How about teaching military guys to use condums!!!!!!!